Liverpool Liberal Democrats Launch Manifesto Ahead of 5th May Elections 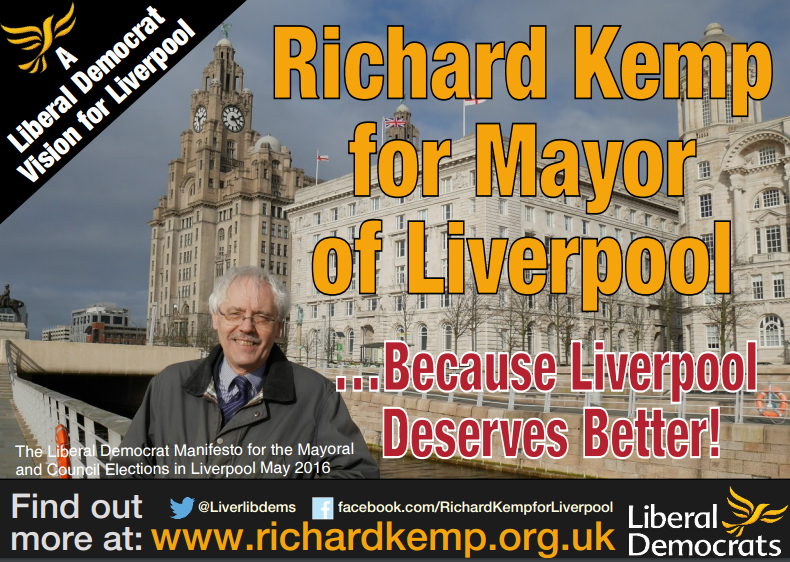 Liverpool Liberal Democrats have launched their Manifesto ahead of the Local, Mayoral and Police and Crime Commissioner elections on Thursday 5th May.

The Manifesto, launched by Cllr Richard Kemp CBE, Liberal Democrat candidate for Mayor of Liverpool, sets out a positive vision for the city.

"Over the past few years politics in Liverpool has become increasingly personality based with the ultimate act being the using of public money to do the work of the Labour Party in defending Labour against justifiable and reasonable claims that we have made.

That is why the Lib Dems and I are launching our manifesto for the elections more than 5 weeks out from those election. We want to put to the people of Liverpool our ideas and our proven competence in rescuing the City from the brink of disaster in the years that followed our taking control of the council in 1998.

We want the people to of Liverpool to vote for us positively and not just because we are not Joe Anderson and his team. We are happy for our Manifesto to be scrutinised, pulled apart and questioned because we are confident that these are the ideas that will once again pull Liverpool back from the brink of disaster. We would be pleased to defend these ideas at community or media led hustings; on the door step or by e-mail or social media.

We believe that this is a manifesto which provides new hope and leadership for our City at a time when Labour have raided the councils’ reserves and increased our borrowing. The Manifesto is full of ideas about bringing people together to solve Liverpool’s problems ourselves rather than continuing to hope that the Government will bail us out."

CLICK HERE TO READ A COPY OF THE MANIFESTO