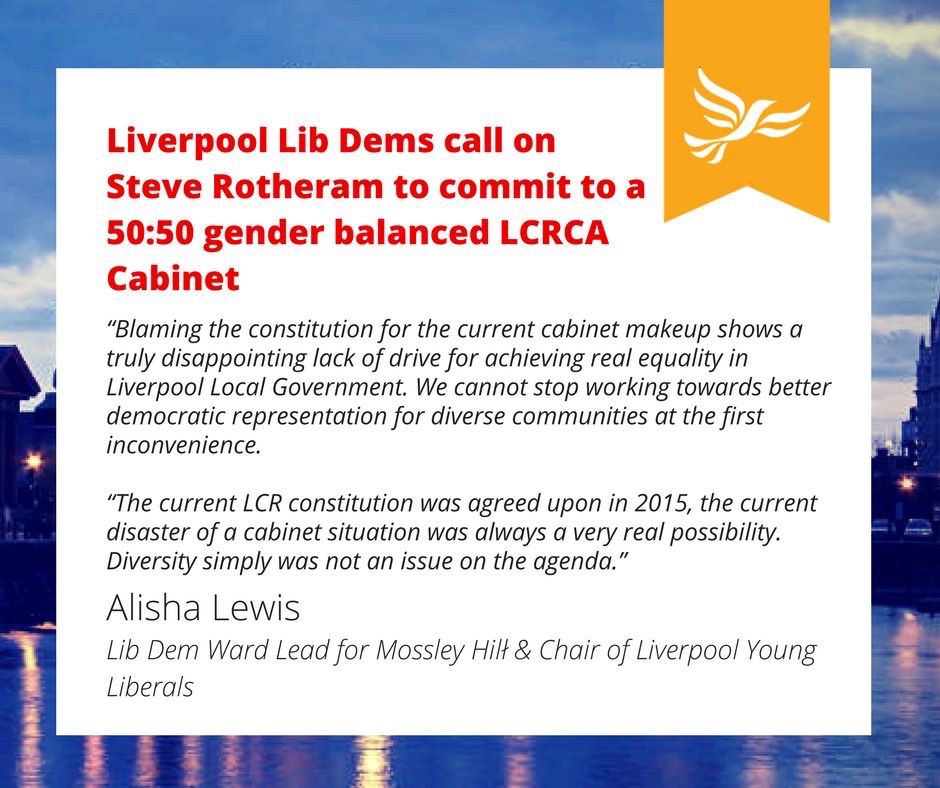 The new mayoral combined authorities were created to bring power closer to the people, and to empower a more diverse range of decision makers who more accurately reflect the interests and needs of diverse communities outside London. Steve Rotheram’s cabinet could not be further from this ideal.

In the current LCRCA cabinet there is just one woman with voting rights. One woman in a seven member cabinet. This cabinet cannot possibly hope to represent the interests and needs of the incredibly diverse Liverpool City Region.

The constitution allows members of the cabinet to nominate a deputy or substitute appointment. To achieve a 50:50 Liverpool City Region cabinet, three, or four of the seven members of the combined authority would need to nominate a woman in their place. As it stands only one member has nominated a woman.

Metro Mayor Burnham in Manchester currently has a 50:50 cabinet, and has achieved this through an extensive long term commitment to improving diversity and representation of marginalised groups in Manchester Local Government.

Alisha Lewis, Lib Dem Ward Lead for Mossley Hill and Chair of the Liverpool Young Liberals calls on Mayor Rotheram to demonstrate a similar commitment by demanding a change in the constitution.

“Mayor Rotheram is running out of excuses for the current imbalance in the LCRCA Cabinet. That isn’t however to say that he doesn’t keep making them.

“Blaming the constitution for the current cabinet makeup shows a truly disappointing lack of drive for achieving real equality in Liverpool Local Government. We cannot stop working towards better representation for diverse communities at the first inconvenience.

“The current LCR constitution was agreed upon in 2015, the current disaster of a cabinet situation was always a very real possibility, and yet there is very little sign of any consideration of the equality impact of the constitution. Diversity in the cabinet simply was not an issue on the agenda.

“If that wasn’t bad enough there have been few, if any, signs of Mayor Rotheram and his team working towards changing the LCRCA constitution to take this issue into account. The only constitution we should have agreed to is one which offers more seats around the table to those who are currently under represented in the decision making process.”