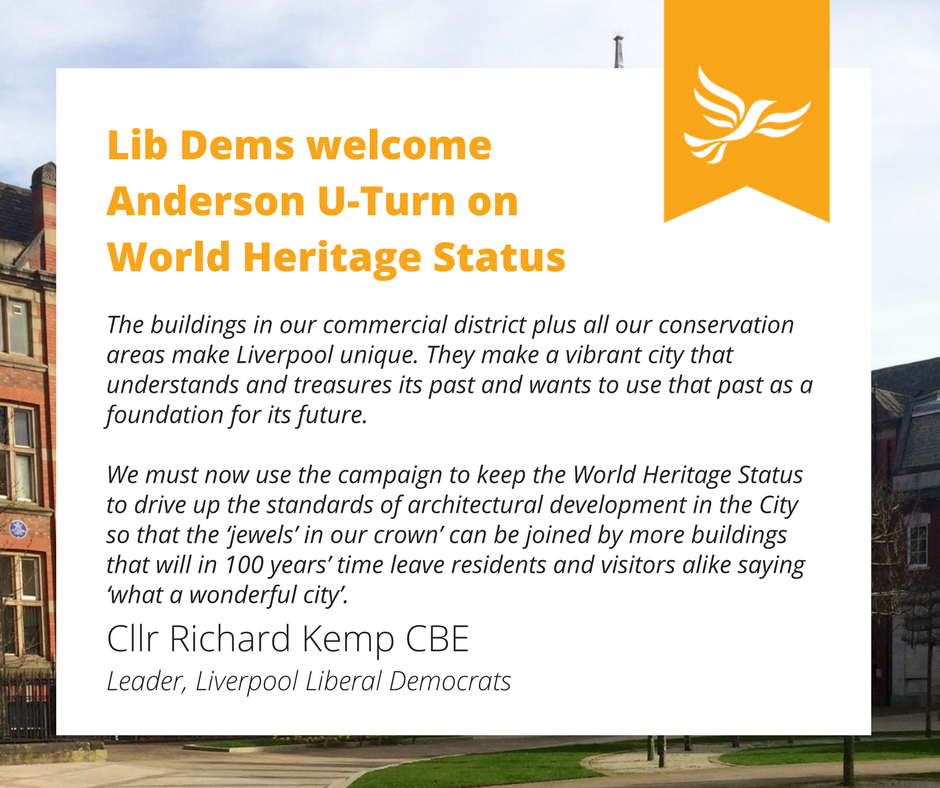 The Leader of the Liberal Democrats in Liverpool has welcomed the Mayor of Liverpool’s U-Turn on World Heritage Status.

Cllr Richard Kemp said, “In 2011 the Labour put out a newspaper throughout the City which criticised me personally and the Lib Dems generally for defending the World Heritage Status gained by the Lib Dems in 2006. Mayor Anderson described it then and used the expression many times in attacks on us over the past 6 years as, ‘just a plaque on the wall in the Town Hall’.

We welcome his U-turn because now, faced with the reality of losing the status, he has seen the light. The buildings in our commercial district plus all our conservation areas make Liverpool unique. They make a vibrant city that understands and treasures its past and wants to use that past as a foundation for its future.

But whilst the Mayor has staggered reluctantly to this conclusion much damage has been done. We have allowed too much low-quality, high rise building in our City Centre. Peel’s Liverpool Waters scheme, which promises much but delivers little must now be reviewed.

We must now use the campaign to keep the World Heritage Status to drive up the standards of architectural development in the City so that the ‘jewels’ in our crown’ can be joined by more buildings that will in 100 years’ time leave residents and visitors alike saying ‘what a wonderful city’.

That is the task for the new group established by the Mayor. I hope they rise to the challenge and that the Mayor is then prepared to do what is necessary to keep the City’s status intact”.