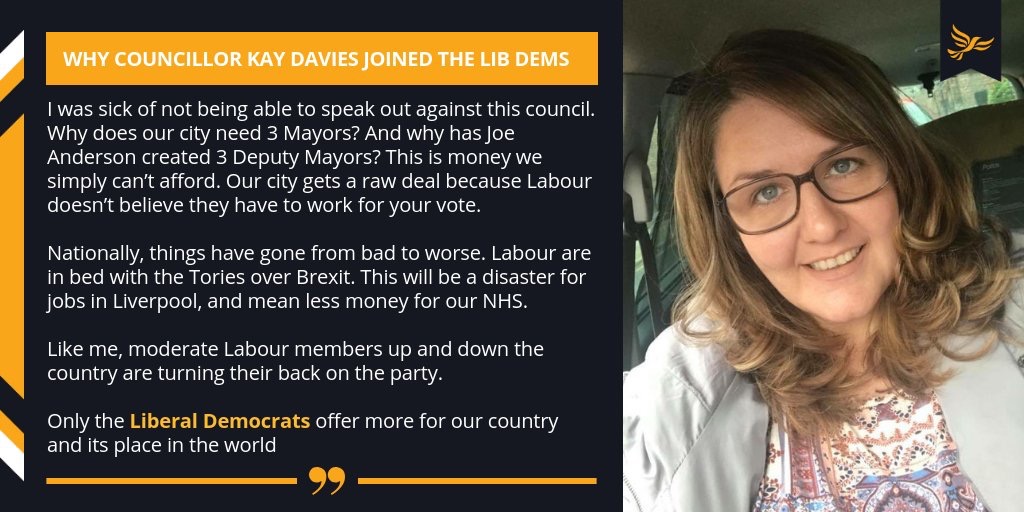 Former Labour councillor for County Ward has joined the Liberal Democrats and will sit with the party group on Liverpool City Council.

“Today I announced my decision to join the Liberal Democrats.

I think you deserve to know what has made me do this.

I was sick of not being able to speak out against this council. Why does our city need 3 Mayors? And why has Joe Anderson created 3 Deputy Mayors? This is money we simply can’t afford. Our city gets a raw deal because Labour doesn’t believe they have to work for your vote.

Secondly, at a national level, things have gone from bad to worse. Labour are in bed with the Tories over Brexit. This will be a disaster for jobs in Liverpool, and mean less money for our NHS, education, the environment and all the other services about which I care passionately.

Yesterday an opinion poll came out which showed that members of the 3 biggest unions, UNITE, UNISON and the GMB are 2:1 in favour of a second Brexit vote which Corbyn and McDonnell are denying them. I will continue to listen to the voice of Trades Unionists even if Labour will not.

So many people tell me they feel let down, and that Labour doesn’t care about our children’s futures. I am now pleased to say that I have joined a Party in Liverpool which has a strong commitment to local action and a joined up national action which will provide a good future for my children and all our children.”

Cllr Richard Kemp, Leader of the Liverpool Liberal Democrats said: “Cllr Davies is the first former Labour Councillor to join us but not the first former Labour member. About 20% of our current membership in Liverpool were Labour voters in 2015 and half of them were Labour members. We are saddened that the final straw for Cllr Davies was the appalling way that she was treated in the Labour Party but are delighted that her values mirror up so closely with those of us in her new political home”.