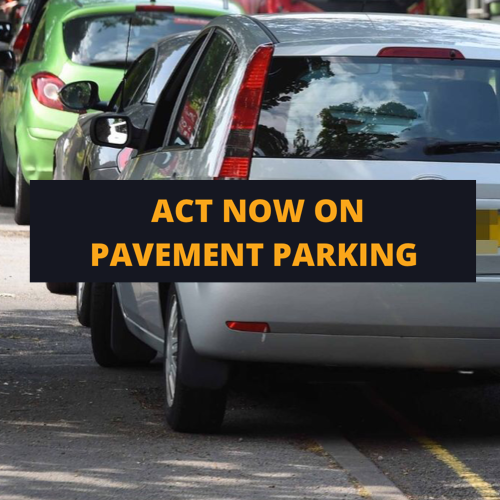 Liverpool’s Lib Dem Councillors have asked the Council to respond positively to the Government’s consultation of pavement parking and ask it to use its existing powers to deal with drivers who park with no concern for the disabled, mums with prams, the elderly and others who are too often forced to walk in the road because pavements are blocked.

In a motion to the next full Council Woolton Councillor Kris Brown has demanded that the Council uses its powers now. He says, “the Council and the Police already have powers to deal with this problem but neither see it as a priority. The Council slashed its number of enforcement officers yet these people usually produce their own pay in the penalty notices issued with the prime purpose of keeping the streets safe”.

Councillor Mirna Juarez, Allerton & Hunts Cross Ward, says, “We know that there are problems because so much of Liverpool was built before the advent of the car and before so many people decided that they needed an over sized ‘Chelsea Tractors’ to get around an urban area so the Council should be given power by the Government to assess its own streets and neighbourhoods to decide where parking can be safely introduced. In the meantime there are places all over my Allerton & Hunts Cross where drivers park with little care for the needs of the infirm, elderly, those with visual impairment and those pushing, buggies, prams and wheel chairs”

The full motion is appended below.

Motion to the first full council meeting, assumed to be 30th September 2020

Council welcomes the Government consultation on pavement parking which is a major problem in the City. It believes that pavements are provided so that pedestrians can easily and safely proceed about their business.

It recognises that in too many parts of the City selfish drivers block pavements which force the following into trafficked roads to get round them:

·       Those using mobility aids such as walking frames and mobility scooters;

·       Those with visual impairment including those who use guide dogs.

However, it also recognises that most of Liverpool was built prior to the advent of mass use of cars and that Liverpool has many types of pavement of differing widths. It therefore requests the Government to grant Councils the authority to designate areas of safe and prohibited parking to recognise the individual circumstances of each road and neighbourhood.

Council believes that more could be done by the Council to make our pavements safe in the short term recognising that successful conclusion of legislation may well be 2 years away. It therefore asks the Chief Executive as the interim Head of Regeneration to:

Conduct a survey through the City’s Councillors to list all dangerous pavements in the area;

To use that information to compile actions points for our traffic enforcement staff and Police to commence appropriate action.

To use the information to compile an action list of areas to prioritise the worst affected areas if and when legislation is passed; and

Ask the Police to use their powers to stop the increasing number of adults cycling on pavements to the detriment of pedestrian and pavement user’s safety.