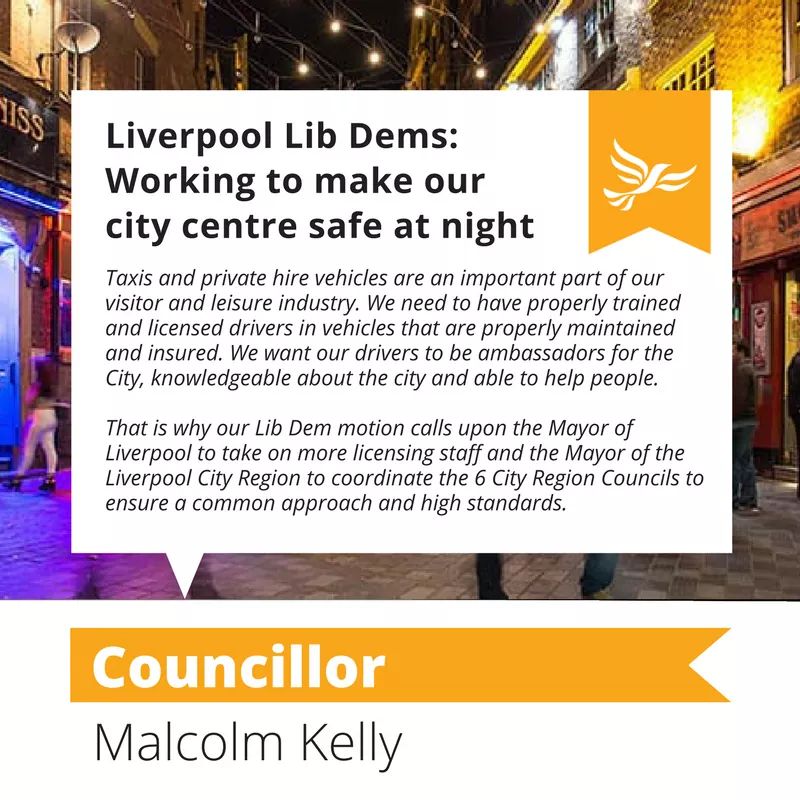 Cllr Malcolm Kelly is tabling a motion to the next meeting of the City Council urging action to make the streets of Liverpool, especially those in the City Centre, safe at night.
Cllr Kelly says, “It is quite clear that there are huge problems. Private hire vehicles waiting for people to approach them as if they were a taxi and then accepting the fare; unlicensed private hire vehicles; uninsured private hire vehicles; dangerous private hire and hackney cabs; hackney cabs from other areas waiting on taxi ranks and picking up fares in the street; parking on taxi ranks meaning that taxis have nowhere to wait for fares.
There are a number of reasons for this some of which are not in our control.  But there are many that are. That is why our Lib Dem motion calls upon the Mayor of Liverpool to take on more licensing staff and the Mayor of the Liverpool City Region to coordinate the 6 City Region Councils to ensure a common approach and high standards.
You might think that we are being over prescriptive in this. Our reply is that taxis and private hire vehicles are an important part of our visitor and leisure attraction. We need to have properly trained and licenses drivers in vehicles that are properly maintained and insured. We want our drivers to be ambassadors for the City, knowledgeable about the city and able to help people. We do not want people who can only navigate by app and who cannot communicate the values and places of Liverpool to visitors”.