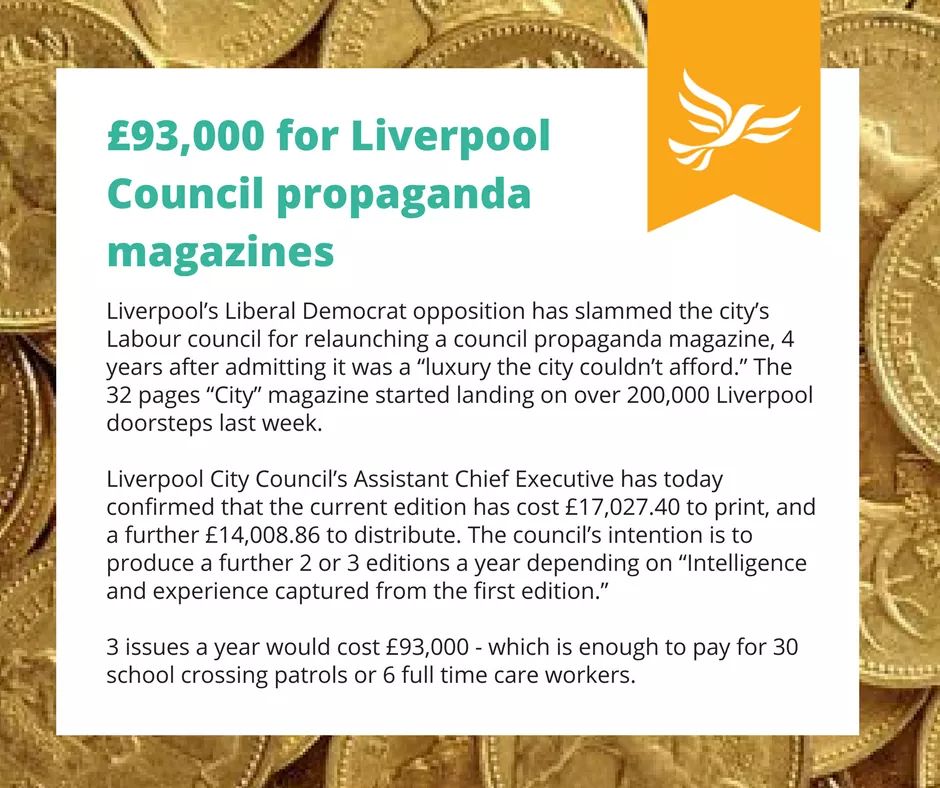 Liverpool’s Liberal Democrat opposition has slammed the city’s Labour council for relaunching a council propaganda magazine, 4 years after admitting it was a “luxury the city couldn’t afford.” The 32 pages “City” magazine started landing on over 200,000 Liverpool doorsteps last week.

Liverpool City Council’s Assistant Chief Executive has today confirmed that the current edition has cost £17,027.40 to print, and a further £14,008.86 to distribute. The council’s intention is to produce a further 2 or 3 editions a year depending on “Intelligence and experience captured from the first edition.”

In 2012, after repeated calls from the Liberal Democrats, Mayor Anderson axed the City Magazine admitting, “There are better ways of communicating with people. Having our own magazine has become a luxury in these austere times.”

“Unless the council has just won the Euro Lottery, the city’s finances are in a far worse state than in 2012. Council Tax payers have been hit with a 5% Council Tax rise, and now there being asked to foot the bill for the elected mayor’s propaganda. The Labour party should pay for their own advertising.”

“In March this year, Mayor Anderson said it was “Heart-breaking” that he was having to cut another 300 jobs. But yet again we see this Labour council wasting money that could be used to protect staff delivering vital services.”

“Perhaps worse, the council made the decision to launch this magazine in secret rather than in a public report. It’s taken Liberal Democrat councillors almost 2 weeks to extract details of how this decision was made, and how much it is costing taxpayers."